I had a dog named Sigh. We lived in a valley near the Teton river. Sigh and I would take walks on the river all the time. One Spring there were places in the river that were wide and shallow and others that were narrow and swift. We got separated at the wide and shallow. By the time I noticed, it was narrow and swift and Sigh was running back and forth along the shore anxious to cross over to me. I yelled, No. Wait. Wait! But he jumped in and started to swim. I tried to get to him as quickly as possible. The rocks were sharp and slippery and the current was fast. We met in the middle just as Sigh went completely under. I reached into the river and though I couldn’t see him, my hands found him and I pulled him out. He wrapped his paws around my neck and pressed his head against me. Shivering, he hung on like that all the way home.

Once I made the mistake of walking into town with Sigh (four miles along the highway). After I left home to go to college he kept going into town looking for me. Then one day I got the news that he had been hit by a car.

I have a recurring dream. I hear Sigh running on the linoleum floor. I don’t see him. I just hear his paws hitting the floor coming towards me. I wake up saying, Come on, Sigh. Come on!

It was a grief-stricken day 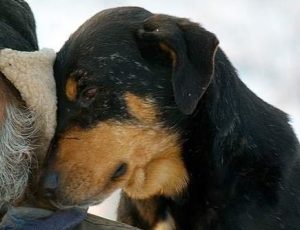 the dog had touched their lives
his eyes looking into theirs

A grief-stricken day. Bikers
with tear-stained tattoos
reeking of cigarette smoke
—and inconsolable
over the three-legged dog
who taught them about God